A reprint from Law’s DIY Blog

Righteo, for the last few years I’ve been mainly covering minor suspension modifications but its finally time to start on increasing power output. First on the list is boost tuning, there’s a huge amount of information on this topic for Evo’s of all generations and Lancer Ralliarts but for the Ralliart colt…. There isn’t much at all. So I figured I’ll put together something for my own reference and for anyone that wants to give it a go.

Disclaimer: I am not a tuner, I don’t claim to be. I don’t have an engineering background of any sort. I’m just a keen individual interested in DIY who seeks to better understand things. With that said, I wont be responsible for any damage what soever caused by following this guide.

Items you need before getting started

Head over here and follow this guide. It is an excellent article written by Andy on how to setup ECUflash with the required links all inside that article.
Hardware Setup
1. First step is to understand how the stock 2 port has been set-up. The stock setup utilizes a 2-port solenoid in a bleed configuration with 2 restrictor pills (One in the solenoid nipple, the other inside the vacuum line right after the compressor housing). 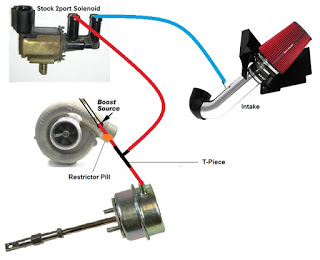 2. Now you need to install a 3 port in the following configuration. You can choose to keep 1 restrictor pill on the compressor > Solenoid line if you wish however keep in mind the addition of a restrictor pill will change the WGDC settings later on. The 3port has been setup in a Interrupt configuration where the wastegate sees no pressure unless the ECU says so. NOTE: Please check the manual on the solenoid you are using to determine what each port does. 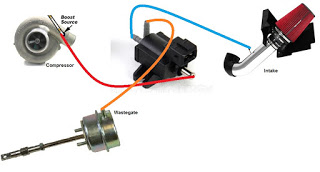 What tables are involved (That I know of)

Now that you have completed the above (from a hardware and software perspective you are all good to go). Before starting however, I would strongly recommend spending some time reading up on Merlins Evo X Tuning guide (Evo VII/VIII) one is okay as well. Just to give yourself some background and understanding.

Disclaimer 2: The following focuses purely on the aspects of how to tune boost, you must take into consideration other factors such as ignition timing, AFR’s, MIVEC, Limiters etc etc. It would be extremely unwise to just alter the following boost maps without consideration of any of the above.

Tables that you need to be aware of are shown below with brief explanations. Note table names are taking from the Merlin definitions so may not be 100% correct.

You should only really need to set these up once at the beginning and once at the end, unless you run into issues or would like to fine tune things further.

Descriptions below from left to right.

This table seems to have a direct impact to WGDC when modified, however I dont believe it has been labelled correctly in regards to coolant temp. Would need someone more cluey and in tune with the dev side of things to look further into this. Advice is to leave it alone and tune within the stock parameters.

Pretty self explanatory, the load limits allowed at each RPM interval. Exceed this figure in combination with the Boost cut delay timer and you will hit limp mode. This is a key safety table and should be adjusted accordingly.

Used to control at which point the maps switch from Boost Target Engine Load Low/High and WGDC 1 and 2. Best left alone, there is no need to change this.

The amount of time in ms before boost cut is enforced.

Once the above is setup, the next lot of tables to look at are the correction tables. These tables will actively add/subtract WGDC based on error %’s and TPS to try match the prescribed boost load targets.

Descriptions from left to right (top down)

Defines what interval the ECU will sample boost at for active corrections.

The key correction table which dynamically adjusts load based on error %.

These set of tables directly control the boost targets you are trying to reach and the WGDC settings required to get there. 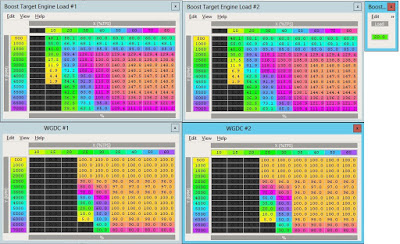 3D table used in conjunction with Boost offset to determine target load in the lower gears as defined by the crossover maps.

3D table used in conjunction with the Boost target engine load #1 table to control boost in the lower gears as defined by the crossover maps.

3D table used in conjunction with Boost offset to determine target load in the higher gears as defined by the crossover maps.

3D table used in conjunction with the Boost target engine load #2 table to control boost in the higher gears as defined by the crossover maps.
That is it for this post, aim was to simply go over the setup items and familiarise yourself with how ECU boost control works, the next post will cover the actual tuning.

After going through the previous post, we should be in a position where everything is set-up and ready to go, Moving on to tuning.

Now that we hopefully understand all the tables involved we can start tune our boost. This section will only cover the base settings and strategy needed to get you going. I wont be including any finalised maps as each car is different and even the slightest differences in modifications will affect boost control dramatically.

Disclaimer: I am not a tuner, I don’t claim to be. I don’t have an engineering background of any sort. I’m just a keen individual interested in DIY who seeks to better understand things. With that said, I wont be responsible for any damage what soever caused by following this guide.

Where do I put in the PSI I want to hit?

There is no such thing, the boost control and entire ECU on the colt reads in LOAD. Merlin has put together a rough table on what load corresponds to what PSI for an Evo. Do not follow this blindly to set target loads, I have found through my own testing though that 160-180 loads roughly line up to the ranges shown in the table but this is not concrete.

Disclaimer: A few things to consider before we get into it.

I have used the following strategy successfully on a few cars when tuning boost, being able to establish a stable boost curve working with the inbuilt ECU controls. I have since evolved this method further covering more aspects in getting finer boost control, but this will serve as a starting point for those who want to give it a shot. Keep in mind this is just what I found works for me, there are many different ways of approaching this and I am in no way advocating that this is correct or the best way of tuning boost. It is simply what works for me.

With the Stock Target loads in place, modify the following:
– Set boost offset to 30 over the stock value of 20. This should land us in the target load range of approx ~170 load.
– Set WGDC to 40% as shown below.
– Set all reactive and upward corrections to 0.
– Set boost limits to 190 across the board. 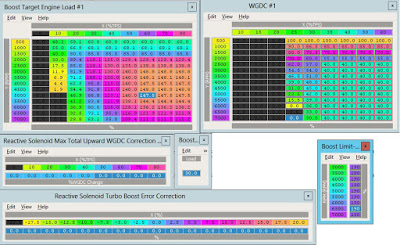 Baseline settings (only shown for low maps, do the same for high)

These settings will not hit our target boost, this is deliberate as we want to start with a safer setting first and slowly work our way up.

After doing a few runs (do this in the higher gears on a motorway or a safe stretch of road not exceeding the speed limits). Log your results via evoscan and load them into Megalogviewer HD to see what your loads look like and what the WGDC looks like as well. Remember we have deliberately started much lower, so it will take a few iterations of raising WGDC whilst logging to reach our desired boost.
Watch for knocks and address them prior to moving forward. Once knocks are addressed, do a few more runs to validate the changes have taken a positive step in countering knock prior to raising boost. I wont cover knock tuning in this article, but you are essentially referencing the knock points in Evoscan against the corresponding cells (and surrounding cells) in the ignition and AFR maps. Andy has written articles on his site in regards to how to address this. There is also a wealth of information available online from the evo community on how to address knock.

Step 3 – Stepping up WGDC slowly to reach our desired loads.

After a few iterations, you can see in the below MegalogviewerHD screenshot that load is peaking at 181, which is approximately in line with our expectation. Boost is holding in the 170’s during the midrange and tapers back to 168 or so towards the top. This is inline with the characteristics of a stock turbo and wastegate combination.
Notice that WGDC curve is nice and steady at 59.5 WGDC post ramp up. This is close to what we are trying to achieve and although it could be refined, for the purposes of this article we will leave it here and let the corrections make up the differences. 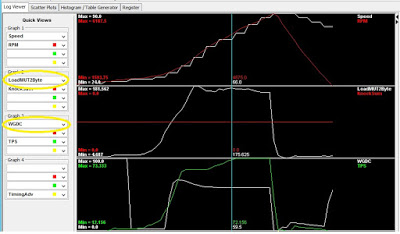 A few runs in, look at the WHITE lines in the middle and bottom charts.
NOTE: this run is done in 2nd gear, same concept applies for higher gears.

Step 4 – Repeating above for both high and low gears

Repeat the above steps for both low and high gears, I recommend using 2nd and 4th gears to establish a baseline boost curve. You will find the higher gears hold boost much more stable and in turn easier to tune. The lower gears will require more WGDC to hit the same desired Target loads. Do not copy and paste the same WGDC for both maps as this can be inherently dangerous given low gear WGDC will cause overboost in the higher gears.

Step 5 – Switch reactive corrections back on

Once the base line boost curves are are setup for both high and low gears, go ahead and switch back on the reactive corrections as follows:

Corrections back on but at a reduced setting.

Notice the figures here are less than what the stock corrections are, feel free to experiment and see what works for you. The above is purely for the purposes of this guide and aids in further fine tuning boost.

With the corrections now back on, do a few more runs and logs and view in MegalogviewHD. You may find that your loads are closer to the dictated targets in the map but consequently the WGDC curve may be fluctuating, this is fine as the ECU is actively correcting minute changes in load and it is expected behaviour.Hint: If you find the WGDC curve being drastically different to what your baseline was prior to corrections, you could further refine your boost curve by referencing the areas the ECU has made major corrections. 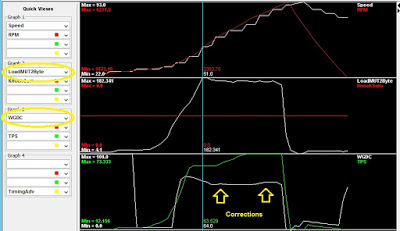 Finished boost curve with corrections on.

If there are no knocks, than that pretty much wraps up basic boost tuning. Make sure you do logs in both cold and hot weather to ensure that varying IAT’s and boost do not affect your tune.

Wrap up and things to consider

By following the above, you should be able to dial in a boost curve that would be fairly consistent across all situations. This post is purely to guide people who are new to this, there is a fair amount of other things to consider when tuning boost but these are the basics.
Any questions just drop me a message or comment.

End of Copy/Paste. Thank you Law!