Merlin’s Guide to Tuning Evo’s talks about one way to get Pops and Bangs from your Mitsubishi Evolution. A while back I tried applying it to Turbo Colts, namely Australian delivered 2006 Ralliart Colts.  The method basically involves richening up the fuel and retarding the ignition in certain spots in the map.  When you lift off throttle, timing goes negative, and fuel is dumped in, so that we get lots of fuel getting ignited very late, and hopefully causing this to continue igniting outside of the engine.

Sounds like a bad idea? It probably is, but it its a neat party trick. As with everything on this site, do it at your own risk!!

For the above method to work you need to delay how long it is before the ECU cuts fuel on throttle lift off.  To do this you will probably need to add the following new table into your Ralliart Colt’s XML: 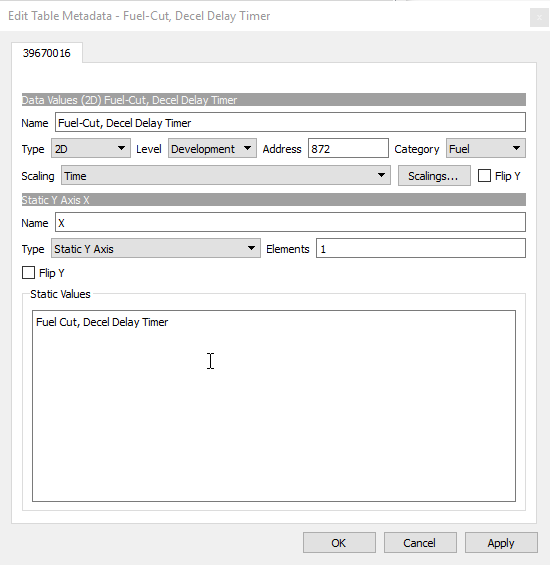 Once added, you should be able to set this to something longer than stock, such as this:

Note the default is 500ms. If you have a value other than this after defining the table, it’s probably in a different location in your ROM and you’ll need someone to disassemble it to find it (leave a comment if you need help).

Now we want to run a lot of negative timing.  The example below produced quite a bit of pops and bangs and we ended up having to reduce the overall number of -15 degrees cells.  The car in question had a straight thru exhaust, which really helps these settings work.  On cars with catalytic converters, the settings below might not be as extreme:

Now the thing to focus on here is the pattern of -15’s. Don’t copy this ignition map, it probably wont suit your car.  The idea is to set a similar region of -15’s in all your ignition maps, at light throttle, and above a certain rev range.  The lower the revs and the greater the throttle range you do it for, the more it will do it.

In the same or similar areas of the map that you set -15’s for in the ignition maps, we want to run more fuel than normal.  Set 10’s where you want to encourage pops.  Here’s an example but note this one doesn’t exactly match the ignition map changes – I was concerned about washing the bores in petrol unnecessarily so went a little tentative:

Flash it on and test it out. It won’t give your Ralliart Colt  pops and bangs all the time, but it will make it a lot more likely.  To test it out play with lifting off throttle, when your car hits the -15 & 10:1 cells you set.  In this example, to test I would accelerate in 2nd or 3rd, then back off leaving revs 3500 or above.  Then back on & off throttle again. It should be enough to make it happen.  Best results are experienced when doing a hills run when you’re on/off throttle a lot, and at higher revs than just cruising.

Let me know if you find a more effective way to do it in the comments! Thanks.