If you have ever logged your ECU Load on a stock Ralliart Colt or Colt Version R, you might have noticed it peaks at 159.375.  According to Merlin’s EVO guides, it equates to somewhere between 11 & 15 psi:

For colts, I’ve found 160 load to equate to around 13-15psi.  But most of us are running higher? How can we reliably tune the car when ECU Load stops reporting load past 14psi? The answer is 2 byte load.

Evoscan (and Tactrix SD card) logging can handle something called 2 byte load but to do that some changes are needed to your MUT table, and also your logging configuration. Before we get into that, some more background.
ECU Load is only 1 byte load. To log it, only one MUT request is required.  It maxes out at 159.375.  2 Byte load requires two MUT requests, one after the other, to retrieve the ECU’s internal master load value, which peaks at 200 load.  The two requests for 2 byte load can cause some rare strange results but more on that later.  For the most part, it is reliable and enables you to log up to 17-19 psi.  This sounds good but how does this impact on tuning?

Impact of tuning with only 1 byte load

If you tune a Colt Ralliart with only 1 byte load, maxing out at 159.375, then your ignition maps at 160 load, will end up being tuned to what doesn’t cause knock at your maximum boost.  Peak power might be the same, but when your car is actually producing 160 load, its ignition will be set as though it was producing 200 load and be too retarded, resulting in less power at that point.  It’s tricky to explain but a few graphs might help:

Based on this, a tuner would look to reduce timing at 160 load, rpms 3500 through to 6000.  They should also reduce timing in 180-260 load range based on this data.  Lets check out the 2 byte load version of the same logging session:

Based on this, a tuner would look to reduce timing at 200 load, rpms 4000-6000 (note the reduced range to before).  As with above, other cells would be adjusted too.  The key take away is that the tuner using 160 load max would be seeing a very different picture of when the car was knocking to the tuner using 2 byte load.

The different picture would result in a different, and inferior tune.   Peak power would be the same, but power at less boost than peak would be compromised.

You’ll need to do two things. First you’ll need to modify your MUT table and then flash the changed ROM to your car’s ECU.

Colt Ralliart 2 Byte Load For AUDM and most JDM rcolts:

Save the changes then flash this onto your car.  Now you need to modify your logging setup.  If you’re using Evoscan check the option : 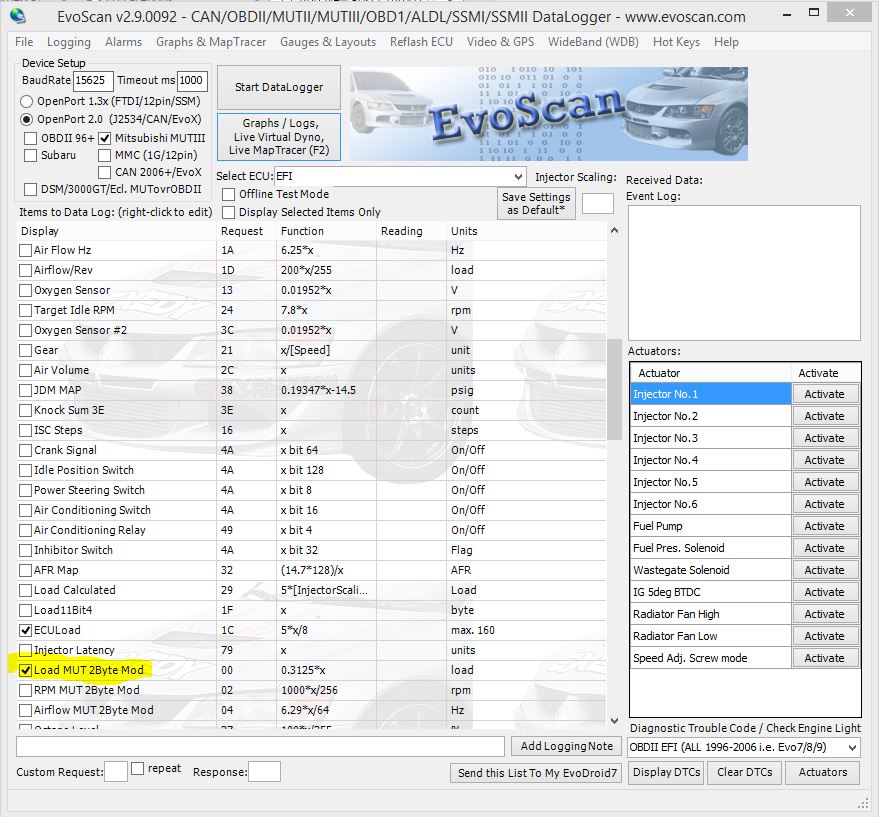 Then when in Live Logging, ensure the Load dropdown is changed to Load MUT 2 Byte Load:

Tactrix SD Card loggers need to edit their logcfg.txt to include the following two lines:

So that’s Colt Ralliart 2 Byte Load. Give it a crack and let me know how it goes. Hopefully this helps you, or your tuner, get your rcolt tuned as best as it can be.

As the 2 byte method needs to make two memory requests, it is possible that in the time between the two requests that the memory location gets over written.  So we have half of 1 byte of information read, then both bytes are changed, then we read the 2nd byte.  The result is an erroneous ECU load result, that should be ignored.